What’s in a name?

The name, Montreal, is an anagram of the name of local draper J J Learmont who had the theatre in Tumut designed and built in 1929 after spending many hours of research in various Sydney theatres. 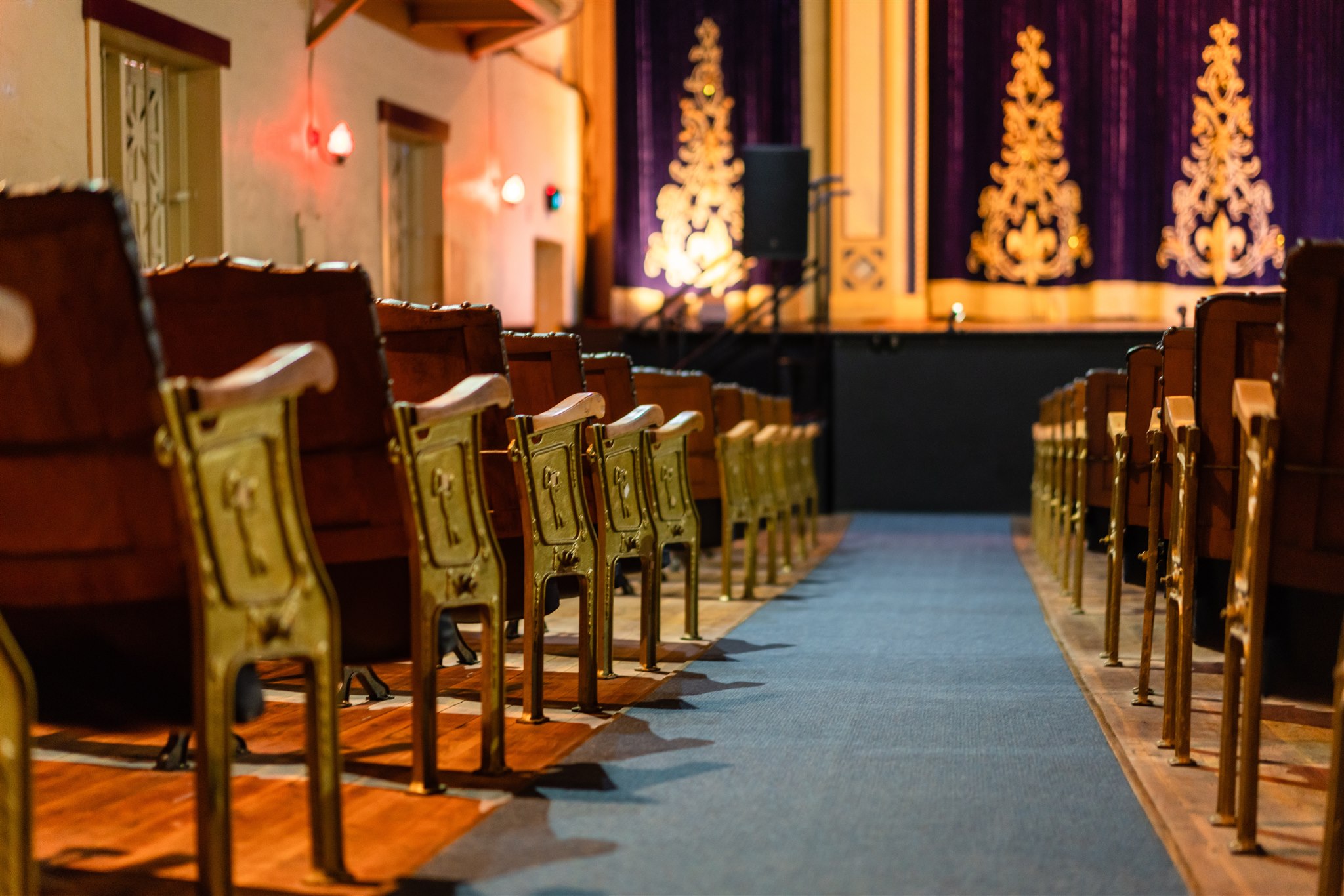 The theatre opened to great excitement on April 2, 1930 with Mr G Laurantus licensed to show films 6 days a week and host the annual Anzac Day service.

At first a non-synchronous music system accompanied the film, soon followed by “the Talkies”.  The licence then passed to his son-in-law Mr Peter Stathis whose family continued to run the business until 1968.  In 1955, after Mr Stathis’s sons came on board, a new Cinemascope screen was installed which involved adding 4 feet to the stage.  New red velvet curtains and valance were also installed to enhance the stage.

During these early years the Montreal was also the venue for travelling shows and home-grown variety performances.

R & M Duffus screened films from 1968 to 1984 after which lessees came and went until the theatre closed as a commercial venue in 1992. 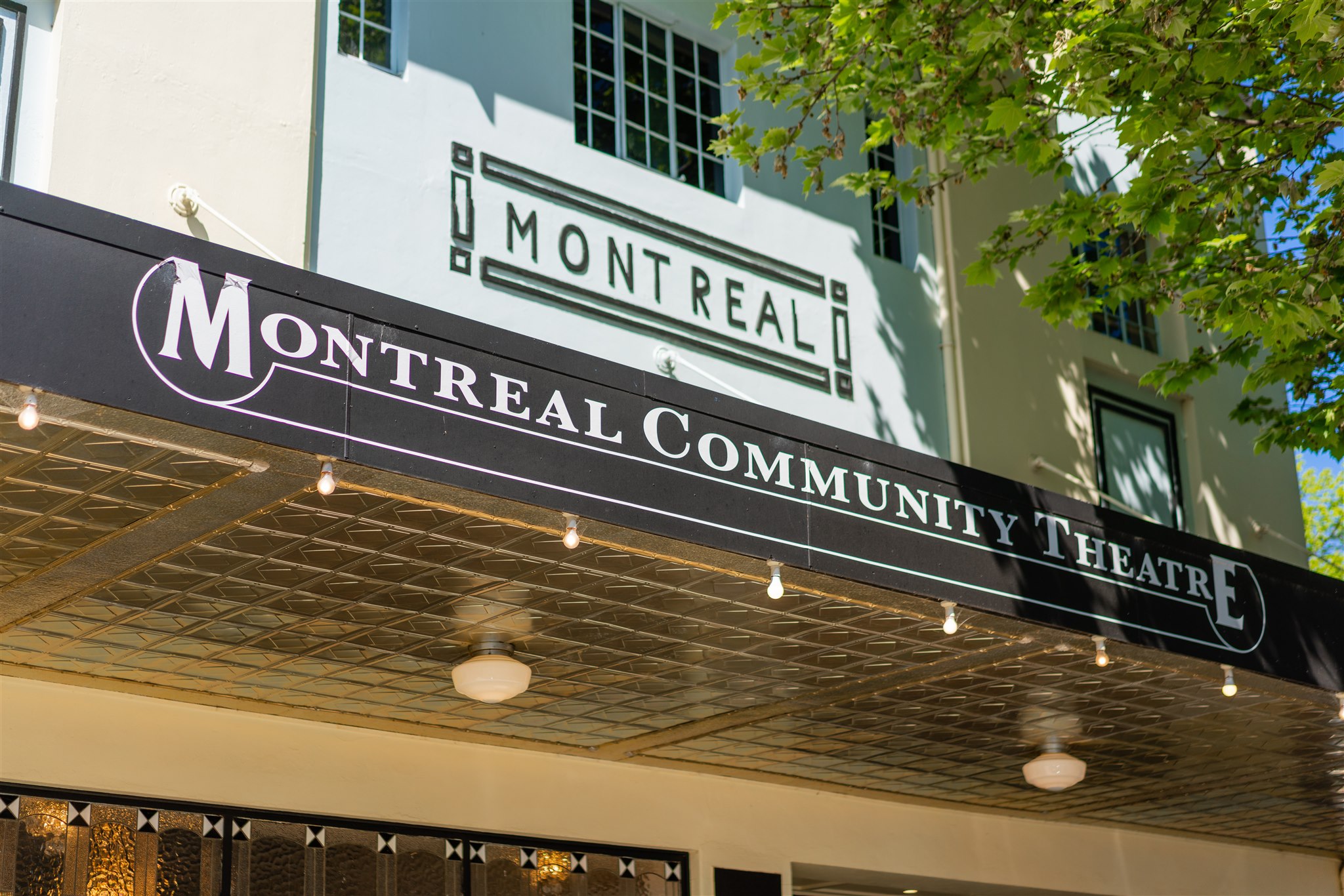 The Montreal is an almost intact example of a 1920’s picture theatre in the style of the architects Kaberry and Chard.  It is ‘modernistic’ in style with Art Deco elements, 862 square metres in area and built in brick by Joseph Nyson to complement the existing draper’s store owned by J J Learmont.

The interior, with its dress circle balustrade that extends along side walls towards the proscenium arch as a series of ‘boxes’, was typical of Kaberry and Chard.  The Edwardian style wall dado, egg and dart motif frieze, cartouches and lattice work ceiling made of caneite and timber, is very striking and was common in the early cinemas from 1910 to early 1920’s.  No other examples of this ceiling type are known to survive in New South Wales, in their original condition.

The seats in the theatre are upholstered in blue leatherette on a wooden frame and supported by cast iron row ends. The fabric covered seats in the dress circle were installed in 2003.  The overall colour scheme for the first 25 years was blue, gold and white.  When it was opened the theatre was licensed to seat 864.

In 2000 the Montreal was listed with the N.S.W. National Trust and in 2013 it was placed on the N.S.W. State Heritage Register. 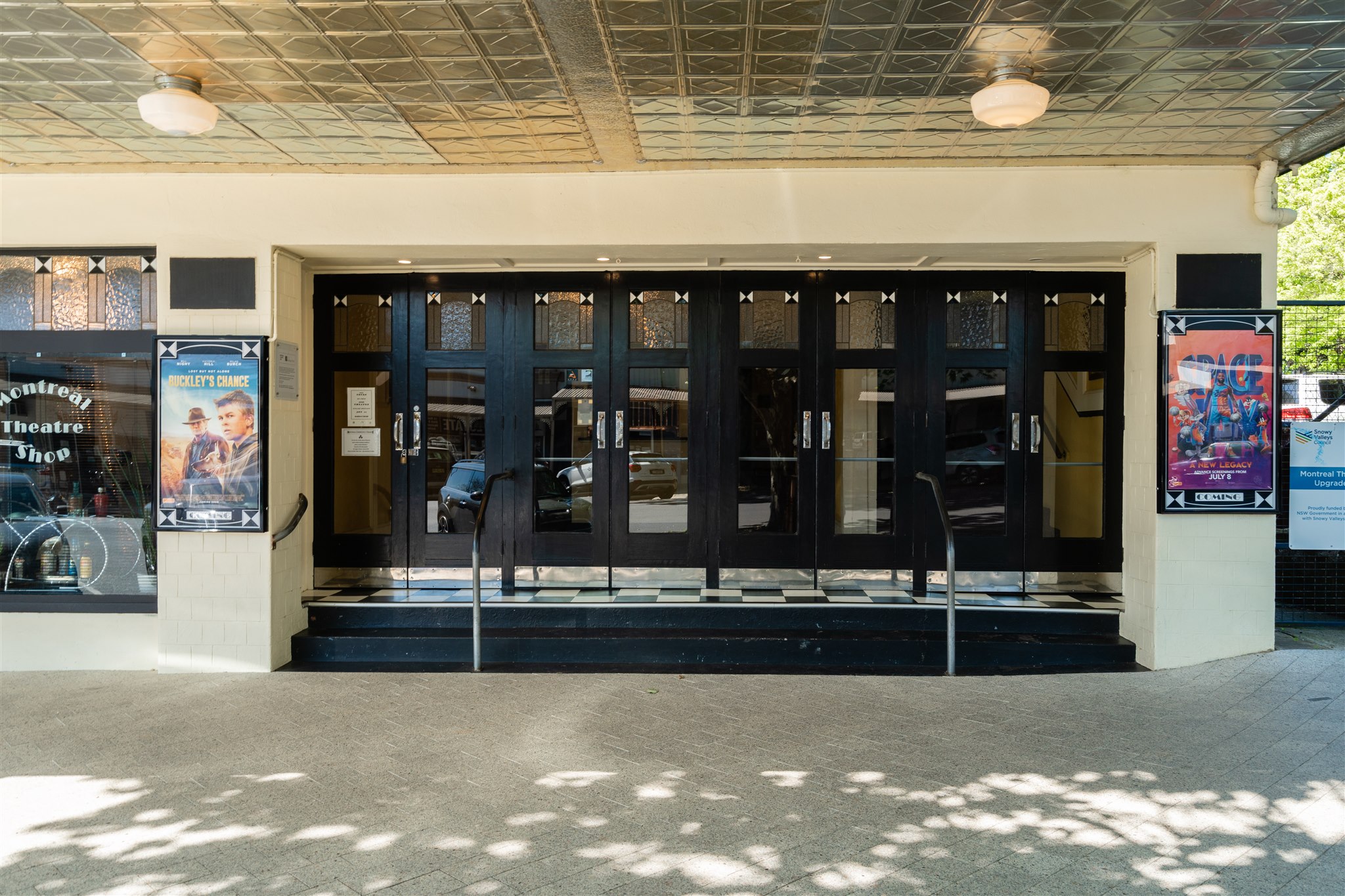 In 1993 the building was put on the market.  Faced with the likely loss of a building that had been an integral part of the town for so long, a group of concerned citizens formed a steering committee to see what could be done.  A building inspector pronounced the building in ‘good sound serviceable condition’ but there was no equipment, sound system or heating.  It was badly in need of repainting, replumbing and rewiring.

With the encouragement of the owners, the Learmont family, and a grant from the locally administered Blakeney Millar Trust Foundation, a 2 year feasibility study was undertaken to decide whether the Montreal could be run by volunteers as a picture theatre and community venue.  Advice was sought; sound systems scrounged and two vintage carbon-arc projectors came from the demolished Hay Majestic.  Volunteers worked day and night to repaint and clean the theatre. 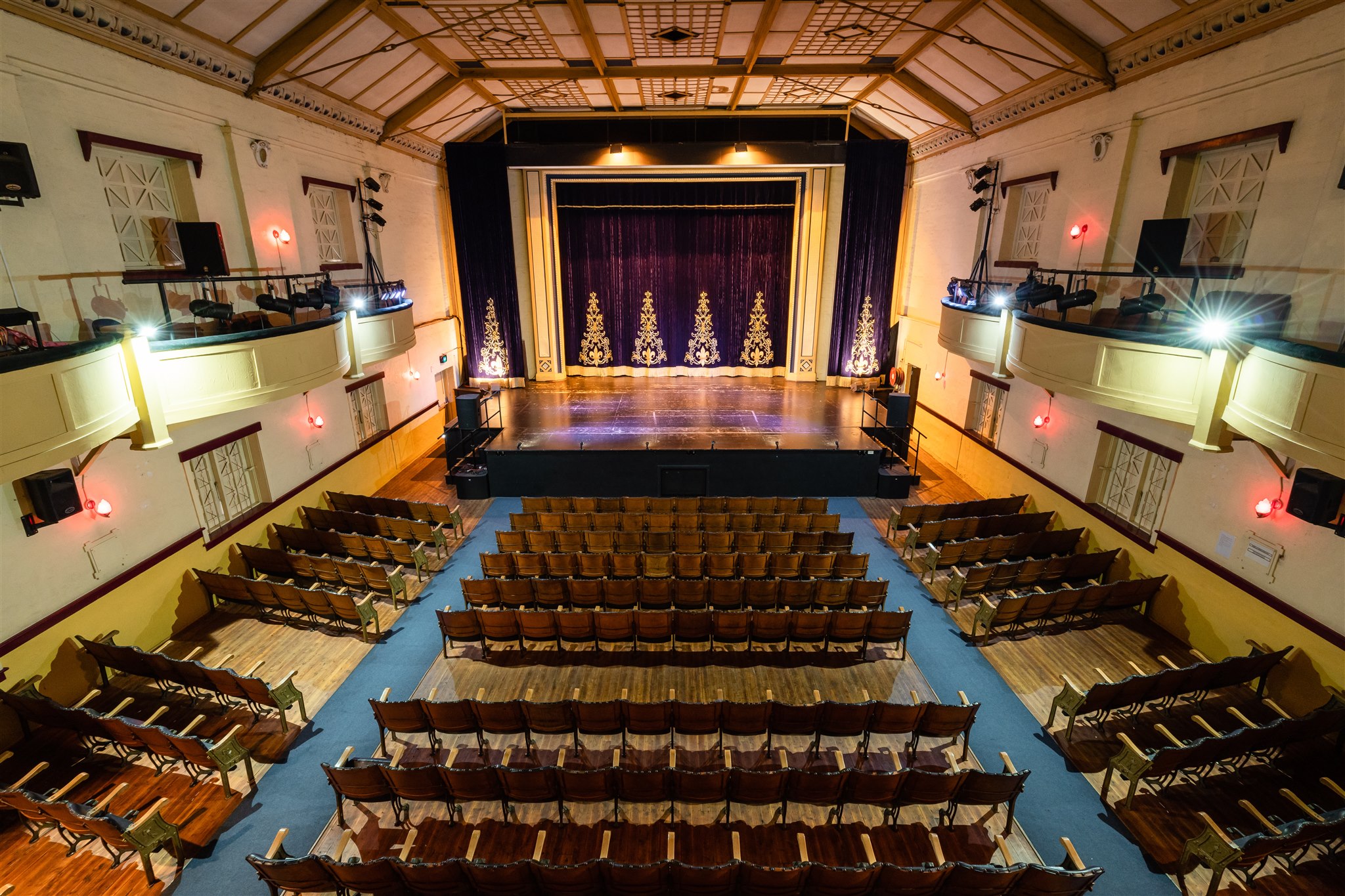 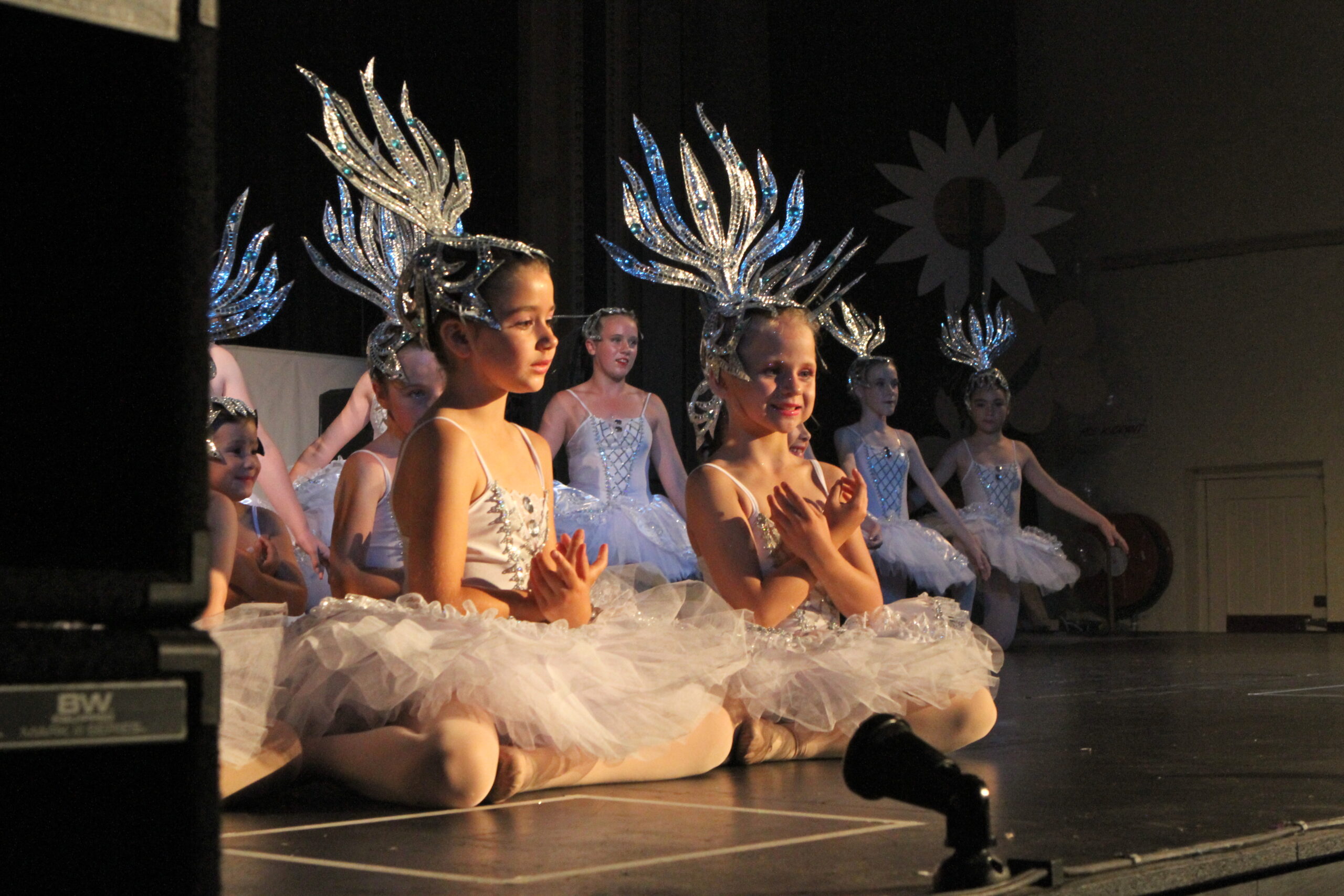 On April 19 1995, 65 years after it first opened, the Montreal reopened with a variety night featuring local talent to a more than packed house (the theatre now seats 541, 194 upstairs and 347 downstairs).  In the first 6 months 10,000 patrons (equal to the Shire population) came through the door.  By the end of the first year it was 25,000.  Movies are shown once a week, sometimes more often.

In 1998, with the support of the Blakeney Millar Trust Foundation and monies raised through the community, the theatre was able to be purchased on behalf of the community.  Generous community donations, large and small, together with a grant from the Ministry for the Arts allowed ongoing refurbishment including stage renovations, vibrant new curtains and a push-button retractable screen, heating and air-conditioning.  An upright grand piano proudly graces the stage.

Under the banner of the Montreal Community Theatre our patrons have enjoyed a range of entertainment from Opera through Jazz and Country to Honky Tonk, Military Bands, orchestras to solo artists, amateur to international professional performers, live plays (drama to comedy), dance (ballet to tap), the latest release films, school speech nights, drug seminars, concerts to weddings, book launches, conferences and art shows.

In 2013 digital cinema was installed together with an upgraded sound system and new speakers.  This was made possible by the generosity of the community plus a number of large donations by local foundations/companies and many, many hours of volunteer labour.

During 2017/2018 major refurbishment of the roof, toilets, disabled access, electrical wiring and upgrading of sound equipment was undertaken with a grant received from the Snowy Valleys Council.

Funds raised from Tumut Takes 2 were put towards repainting the exterior of the building.